We recently hosted Tyler and Kyle from the Pool Chasers podcast at our headquarters in St. Paul, MN to share a glimpse into our business and teach them about leak detection. After a day of training, they sat down with Lance (Owner) and Brad (Technical Sales Manager) to have a conversation about the history and values of our company as well as more tactical information about how to succeed in swimming pool leak detection. As a sponsor of the podcast we’re happy to be supporting Pool Chasers on their mission to educate and inspire the pool industry.

You can listen to the podcast on their website here or on Apple Podcasts, Google Play, Spotify, YouTube, Soundcloud or Stitcher. 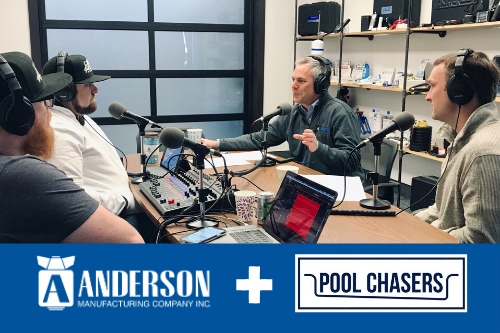 The Leakalyzer was recently featured in Aqua Magazine’s March 2019 issue! Check out Aqua’s interview with Lance Anderson and coverage of this helpful piece of equipment here. 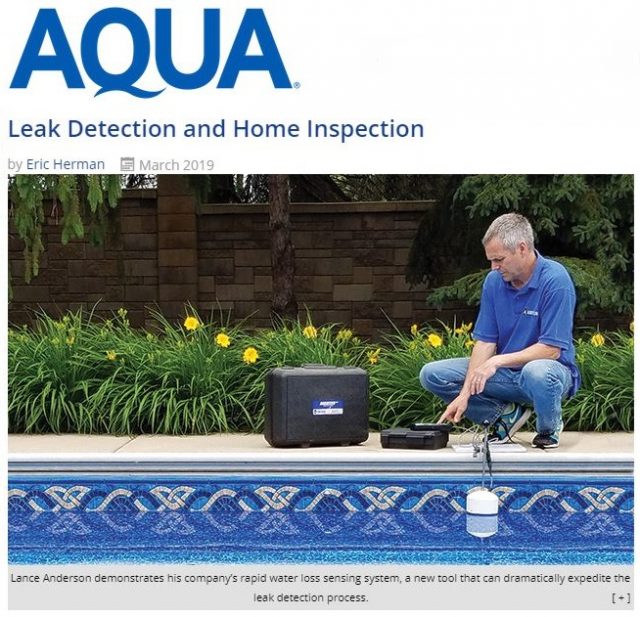 We rarely toot our own horn, but sometimes we get feedback that’s too good to keep to ourselves. We recently got a LeakTrac 2100 back for service that had been used in the field for 20+ years! After a quick tune up we were able to get it ready to keep finding leaks. 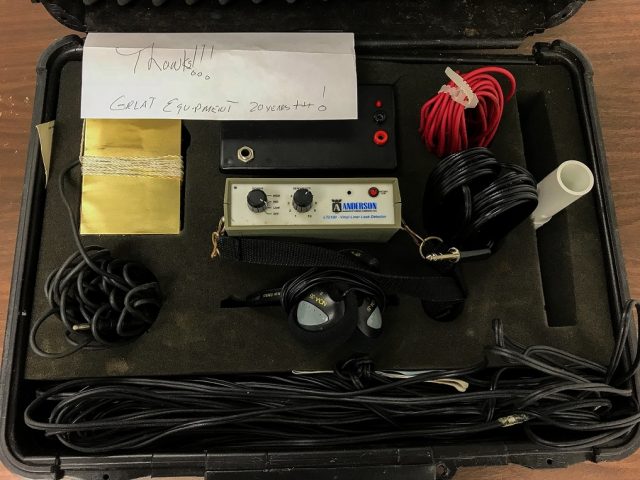 This is actually a  common experience here at Anderson Manufacturing. We build our equipment to last, so you can depend on it for year after year. If something isn’t working quite right for you, send it in for service and we should be able to get it running like new in no time.

Investing in quality pays off!

Concrete crack repair can be a daunting task – between the high cost of repair materials and the large time investment, it’s important to make sure you’re using the best products and processes to get the job done right. To help you do just that, we’re introducing the new Carbon Fiber Pool Grid Stitch, the latest innovation in concrete crack reinforcement.  This new product maintains the exceptional strength of a traditional Carbon Fiber Staple, but is less expensive and features a much easier installation process.

Pool Grid Stitches are designed to add value and strength to concrete crack repairs by distributing load beyond the fault. The stitches are comprised of high tensile strength carbon fiber and molded into a unique grid-like, woven formation. This grid design allows for the epoxy to move through the stitch, providing a superior bond with the staple epoxy. These time-saving stitches install perpendicularly into a single saw cut, eliminating the need for chiseling away material from the staple bed and drilling extra holes. When used with Fortress C400 epoxy Pool Grid Stitches are ICC building code certified.

The Carbon Fiber Grid Stitch is available in complete 10 or 30 stitch kits. 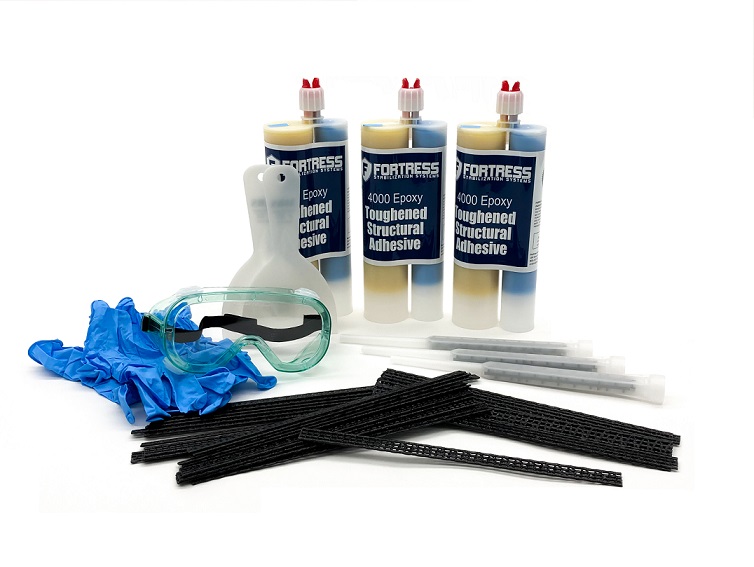 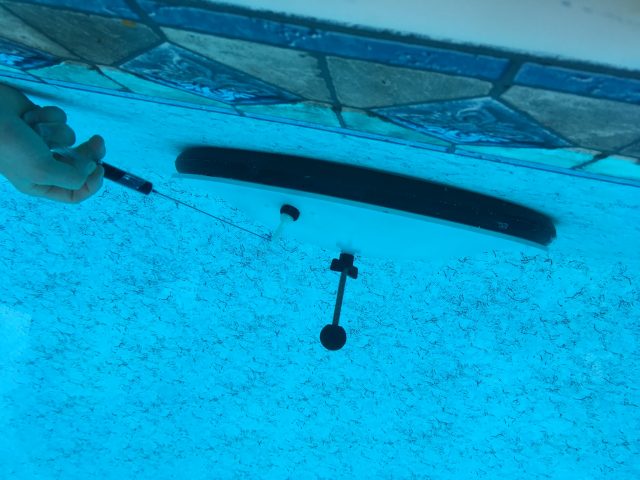 We introduced the Light Cover for use with our LeakTrac – Vinyl Liner Leak Detector more than 20 years ago.  The purpose of the cover is to insulate the light from being a distracting electrical connection from inside the pool to ground.   As many of you know, skilled artisans in the leak detection business have also used the domes from these covers (and other types of covers, bowls and plugs) with dye to detect the presence of a leak in an isolated area, and they have been doing so for many years.

Red Rhino Leak Detection of West Palm Beach FL, recently acquired patents for a method and device for locating leaks in swimming pool lights using a transparent dome, dye, and a suction cup to hold the dome over the light, (#9464959, #9128002).  They filed a lawsuit against us, alleging that the manufacture, sale and use of our Light Cover dome for dye testing infringes on one of their patents.  We feel strongly that Red Rhino’s patents are invalid because the claimed technology has been known and used in the industry since well before Red Rhino filed its patent applications, and we also feel strongly that our LCDT product does not infringe for multiple reasons.  We shared these beliefs with Red Rhino even before they sued us.

Nevertheless, we also respect the intellectual property of others.  Thus, until the suit is resolved, we have elected to replace the clear dome of the LCDT product with an opaque dome.  The patent at issue specifically requires that the housing (or dome) of the device be “transparent whereby the flow of dye in the hollow housing is observable by a user of the device.”  With the opaque dome, the user of the LCDT product cannot observe the flow of dye in the hollow housing (dome).  Thus, the modified LCDT product does not meet this requirement of the patent claim.

This modification does not change the utility of our LCDT product.  To detect the presence of a leak in the area isolated by the dome of the LCDT Light Cover, we instruct the user to administer dye outside an opening in the dome.  If the dye is sucked through the opening in the dome the user knows there is a leak somewhere in the isolated area that will warrant further inspection and ultimately a repair.  If dye is not sucked through the opening the user can eliminate it as a possible leak source.

Thus, it does not matter whether the dome is transparent or opaque for the purposes of detecting the presence of a leak.  And in fact, spending time watching the movement of dye inside the dome will provide no additional benefit because currents resulting from the draw of water into the dome actually disperses the dye faster than would be the case without the dome.  In order to actually see dye move toward the leak one would have to deliver it just as carefully and closely to the suspected area as one would without the dome.

Clear domes are of benefit for other leak detecting purposes however, and we do still sell transparent domes in other configurations for these applications.

Dye Testing Cones enable you to quickly and easily determine if a section of plumbing is leaking.  Block off all but one opening of the line to be tested with the one-sized-fits-all cones that friction fit into any pipe or fitting up to 2”.  In the remaining opening use the cone with a hole through it.  Now dye test just outside this hole . . . if there is a leak in the line, dye will be visibly drawn into the hole.  Use to test returns, jet lines, floor cleaning systems, spa therapy jets and double bottom drains.

Six total cones, including the one with the hole, nest conveniently into a compact stack. 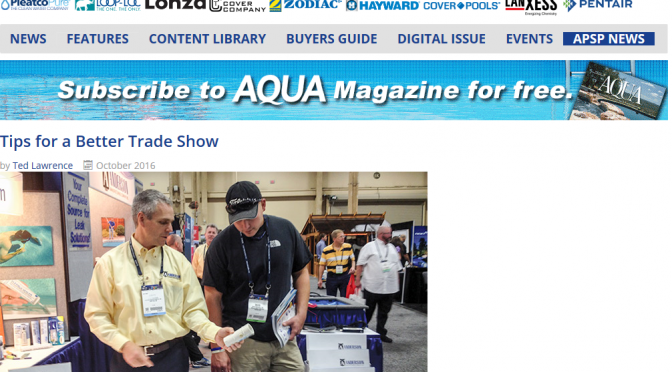 Trade show season is here and to help you get ready for it Aqua Magazine put out an article titled Tips for a Better Trade Show.  We couldn’t help but notice the nice picture of Anderson Manufacturing’s Lance Anderson in the booth talking over retail products with a customer.

In the post Ted Lawrence highlights tips from good notetaking to beating the traffic.  Much of his article, however,  was directed towards finding new products.  While lots of our time, energy and promotion is spent on the leak detection equipment side of things we have many innovative and time tested leak detection and repair products that make great retail intems.  Here is a highlight of a few retail items that you could sell to customers or stock your service crews with:

We have lots of retail and repair items available. Make sure read the article to prepare for the show and plan to stop by our booth! 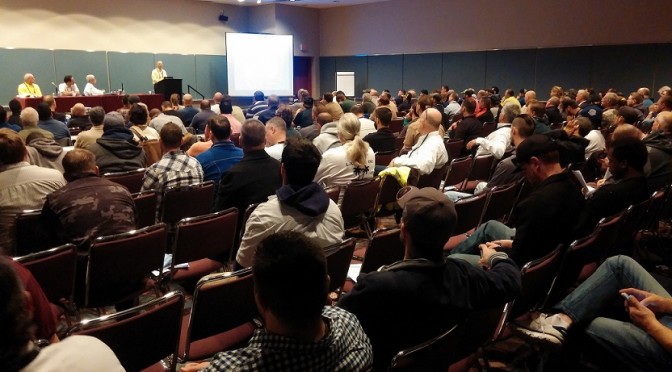 “I make sure to come to this one every year.”
“Such a good refresher and I always pick up new tips.”
“This class is why I come to the Atlantic City show.”

Anderson Manufacturing’s Leak Detection Seminar, one of Aqua Magazine’s Top Picks, lives up to its hype once again as hundreds turn out for the Leak Detection seminar put on by Lance Anderson in Atlantic City. The capacity crowd listened to Lance and a panel of experts discuss the importance of leak detection basics and answered questions on the intricacies of leak detection.

With over 110 years of leak detection experience on the panel, the three experts provided solutions to tricky problems and tricks for locating and fixing common leaks. Throughout the 3 hour seminar Lance and all three panel experts talked about a systematic approach of applying the fundamentals of leak detection to be the most effective and efficient way to perform leak detection.

The importance of pressure testing in the overall leak detection process was highlighted several times. Pressure Testing continues to be an crucial component to underground plumbing leaks. Overall it was nice to hear the experts on the panel and many in the crowd validate our leak detection process and confirm the value of our products:

Overall it was a good day as we “brushed up on the basics” and shared the tips and tricks for tackling the toughest leaks.