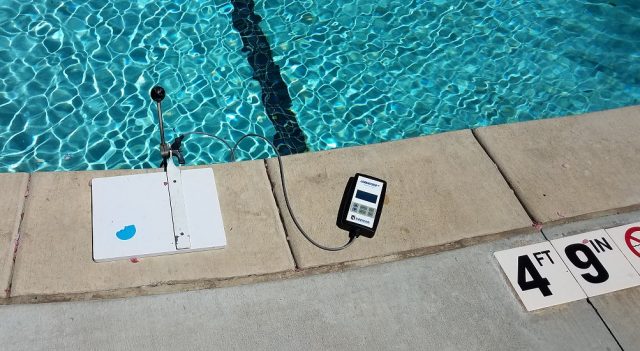 After opening the pool for the summer the customer noticed significant water loss and gave us a call. When we arrived to the job the Leakalyzer reported nearly 6” of water loss per day.

The first two leaks were found right away while we were gathering information. One was clearly visible while we were inspecting a return fitting and the other was found around an equalizer line while we were scanning the pool with a hydrophone. We were able to repair both leaks with Leakmaster Pool Repair Putty.

After the initial leaks were repaired a new Leakalyzer test reported 2.35” of water loss per day. We used dye to find two more leaks – one at another return fitting and one at the tile line.

Once these leaks were repaired the Leakalyzer was still reporting a loss of 1.84” per day. So far we had found and repaired four leaks but were still losing a significant amount of water. We ran a quick pressure test to eliminate the plumbing as the source of the remaining water loss.

Finally a crack in the tile line deeper down in the pool was found and fixed getting us to a no water loss test. Five leaks found, five leaks repaired. Between the multiple Leakalyzer tests, pressure tests, electronic microphone use, extensive dye testing and even diving in freezing spring water this job was more work than most. Once it was all said and done we felt good that we didn’t just solve one of their problems and move along. The property manager was thankful and eager to get us set up as a vendor for all their properties. They even mentioned that we’d done more than other companies had ever done.